An accessible version of the above presentation can be downloaded from my Google Drive for free! :)
Avians--feathered maniraptoran dinosaurs--long considered the ammonite a symbol of longevity and prosperity. But there was more to these fossils than they realized--the ammonite was imbued with ancient magic that only Warriorfeathers could wield. When the Oasis, the main hub of all avian kind west of the inland sea, is threatened by distant volcanoes and the presence of tyrants, Warriorfeathers from every enclave are summoned. Iara is tasked with this fate, and must undertake a perilous journey. Will she survive and ascend as the next leader of the Oasis?
Content Warning - Iara’s Crossing is a dinosaur fantasy novel geared toward people between the ages of 10 and 100+ years old. It contains elements of violence, gore, infertility and emotional/verbal abuse/manipulation. Reader discretion is advised.

Read the Prologue and First Chapter For Free-Click the Image Below! 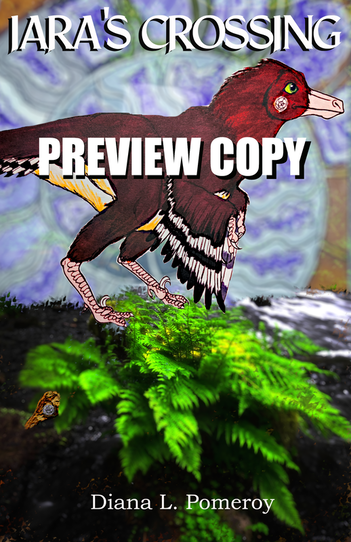 Try before you buy! The front matter, prologue and first chapter of 'Iara's Crossing' are available for you to download in PDF format for free!

Read the Prologue and First Chapter Free, and Leave a Review with Wattpad!

Purchase the Paperback of Iara's Crossing Through Lulu! 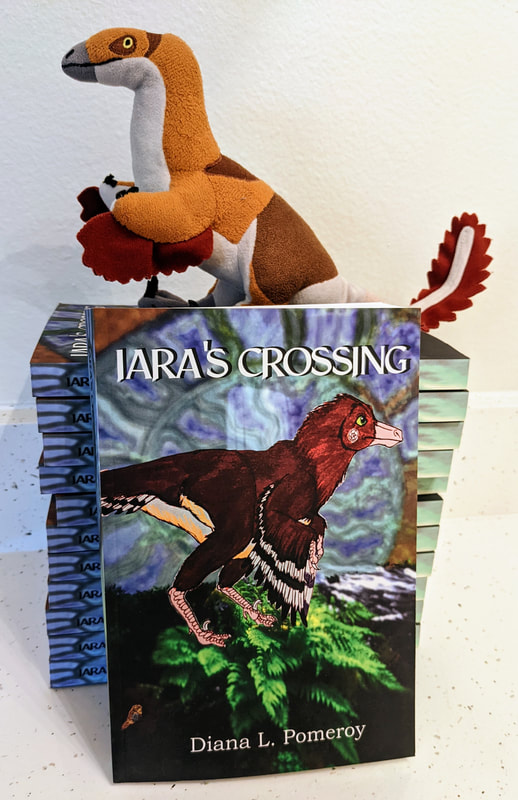 Get the e-book of Iara's Crossing Through Ko-fi!

Interested in Enamel Pins, Stickers and More? Check out my Ko-fi Shop!

The Characters of Iara's Crossing 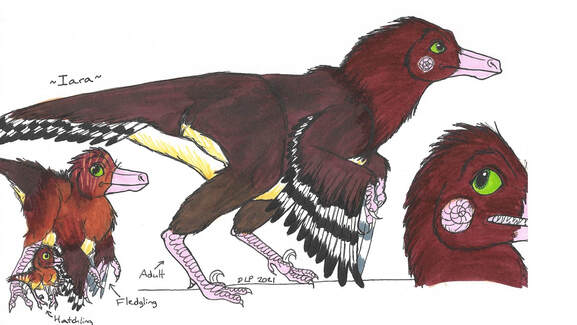 Even though Iara hatched too soon and was raised in a secluded forest enclave west of the Oasis, she is initiated with the scar of an ammonite-a symbol of the key to her destiny. She is persistent, strong willed and warm to those she cares for--but will this be enough to persuade the ruler of the Oasis that she is a worthy Warriorfeather? 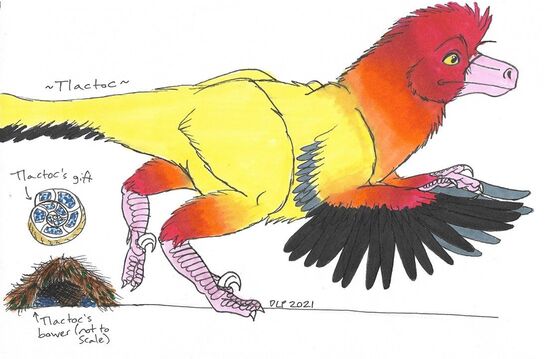 When Iara becomes curious about the avians' mating ritual known as the Lek, she stumbles across the bower of Tlactoc. Colorful and exuberant, as well as quiet and thoughtful, Tlactoc is willing to join Iara on her journey--yet is this effort all for naught? 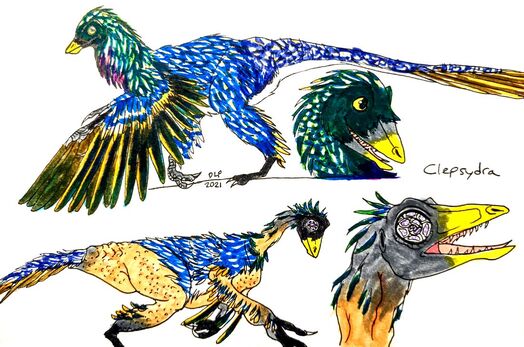 The first among her flock to successfully nest west of the great inland sea, Clepsydra is a mysterious avian with a dark and sad past. The ammonite in her eye socket sits like an ominous portent of things to come...will Iara be the next Warriorfeather to take her place at the Oasis? 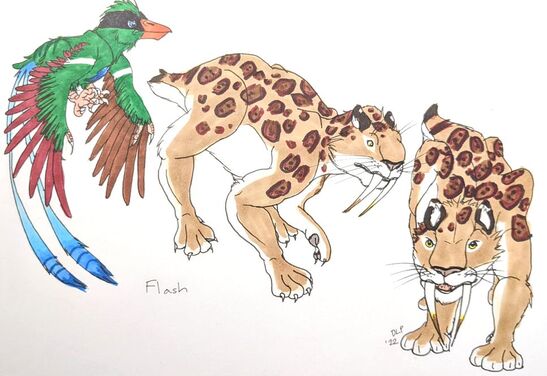 Flash lost everything in the prime of his life when Clepsydra denied him access to the Oasis following a brutal act of betrayal. A self-absorbed, cruel and vengeance driven Shapechanger, Flash seeks to destroy every Warriorfeather that remains west of the inland sea, starting with Clepsydra's protegee, Iara. He will stop at nothing to get what he wants--but will he succeed?

The World of Iara's Crossing 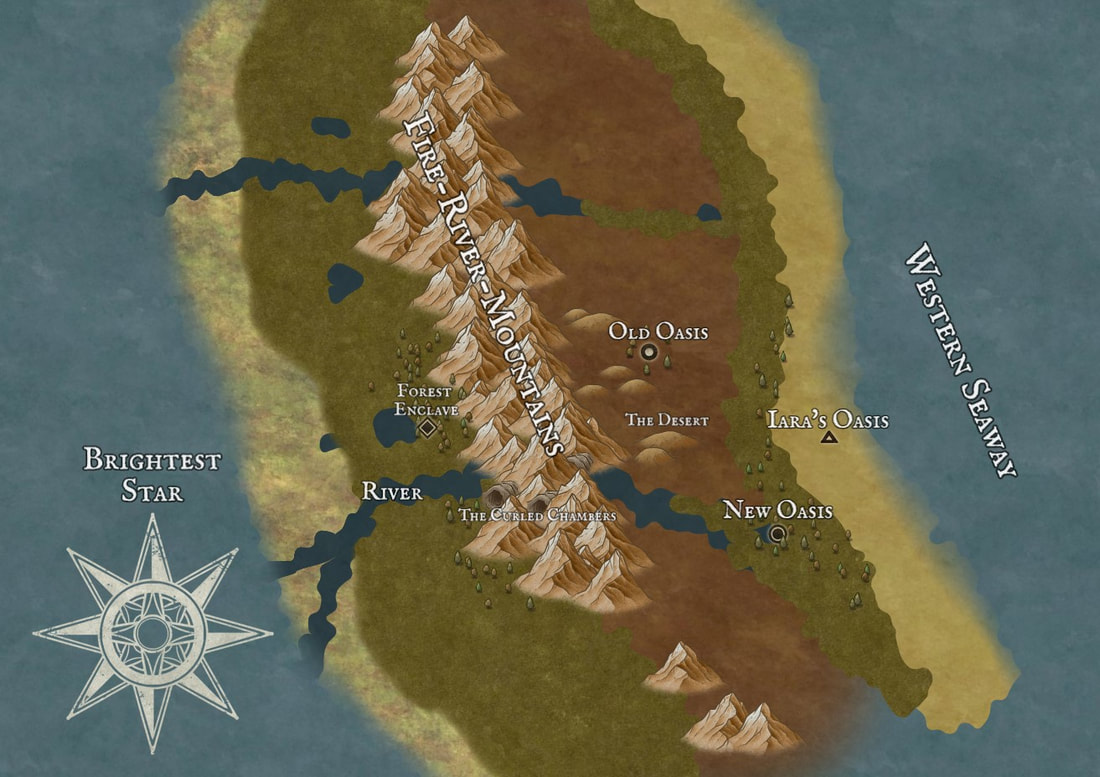 The map of the world of Iara's Crossing. The western edge of a continent divided by an inland sea (Western Seaway). Rivers flow from the central mountains west. Nestled among these is the forest enclave where Iara was born and raised. Other locations shown are further explained in the novel. Based on the USGS map of the western US in the Cretaceous period and made in Inkarnate.
Advanced Praise for Iara's Crossing

"Iara's self-doubt holds her back and makes her a reluctant hero...she tries to push back against what everyone tells her is her destiny, it shows that her will is her strongest attribute. I’m excited to see what she does next! I really enjoyed reading this!"-Terry Manley, Screenwriter and Author of Riley Adams: Paranormal Investigator

"All-in-all, a fantastic story with great imagery and symbolism. Iara doesn't fit in, she was made to stand out!"-Elaine B., Author of A Bringer of Light

"An incredible story! I love Iara, I love Tlactoc, I love the lore so, so much! I was deeply engrossed in the story--it's that kind of good!"-@JingoTheHyena on Twitter

"I was really invested in the characters the whole time...the descriptions of the world and and different landscapes is fantastic. I love it, it is really well crafted, and I want to read the sequel!"-Charlotte Keesey Hipolito, Author of Beyond the Trees

Find Out More About Iara's Crossing (and the sequel!) On These Websites!

Thank You to My Indiegogo Backers, Patreon and Ko-fi Contributors!